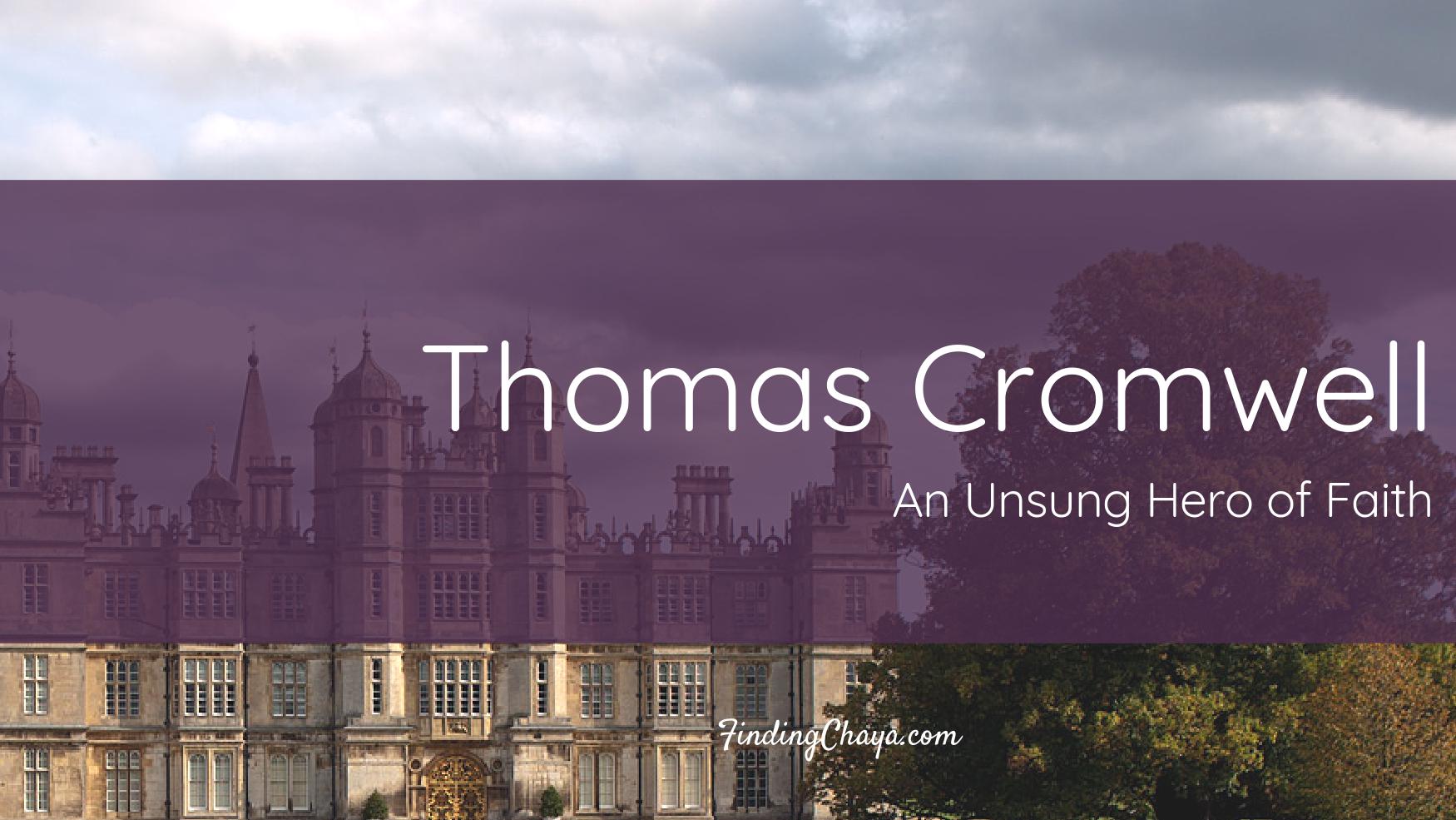 If there’s one thing I’ve gleamed from you hero types it’s that there’s always hope.

Captain Hook, Once Upon A Time

Yeah, this is a post about a well-known figure from the English Reformation and I have started it with a quote from Once Upon A Time. But hey, if you hang out with us over on Instagram then you know that OUAT is a favourite in Finding Chaya HQ. Anyway, I’m totally about to tangent about why I love fantasy when I’m meant to be talking Reformation history so let’s get back on track.

I first came across Thomas Cromwell in 2009 as part of my History A Level. As in, I wrote an entire essay about him for my coursework. Kind of liked the guy but I wasn’t obsessed. He was a pretty cool guy and more interesting than the other Thomases in Henry VII’s court. (Sorry if you’re a fan of Thomas More but the guy sends me to sleep! Even if he was pro-female education.) But it wasn’t until my final year of studying History that I really became obsessed with this dude. As in full on, intellectual, historical crushing on him. And yes, I have seen the portraits but it was a mental thing so appearance doesn’t matter.

And while my obsession with the Tudor Reformation, including Thomas Cromwell, has come and gone in waves, I have remained convinced that he is an unsung hero of the faith. So today I am going to argue as to why he should be considered a hero of the faith.

What Makes A Hero?

Typically, it is Hebrews 11 that we turn when trying to figure out what makes a person a hero of faith. Verse 1 says

“Now faith is confidence in what we hope for and assurance about what we do not see.”

Now does it make sense why I started with Hook’s quote? Because to be a hero is to have hope, and therefore faith. The chapter goes on to mention Old Testament figures who kept faith in God when the circumstances would have made it very easy to lose that hope.

The source of that faith? God. A belief in God, and His plans for us. That is what motivated Abraham, Moses, Rahab, David. Even the prophets.

Did Thomas Cromwell allow his faith to motivate his actions during the Reformation? Was the faith that historians have debated over the cause of the policies Cromwell enacted? I’m going to argue that though it wasn’t the only cause (too much a History graduate to say it is about one factor), it was a definite factor in Cromwell’s motivations. I believe that makes him an unsung hero of the faith.

Okay, I know civil servants did exist at the time but it is honestly the best way I can think to describe Cromwell’s role at court. In many ways, he is akin to Sir Humphrey Appleby in Yes Minister. But the acts that he passed have a subtle evangelical flair to them, particularly compared to acts passed after his execution.

Cromwell was Henry VIII’s right-hand man during the ‘King’s Great Matter’, otherwise known as when he ditched Catherine of Aragon in favour of Anne Boleyn. It was during this period that the Royal Supremacy came into being, declaring England’s monarch the Head of the Church as well as the State. This comprised of acts that eliminated the Pope’s authority, dissolved the monasteries, and stopped many of the practices focused on enriching the clergy and church (at the expense of the people economically and spiritually in my opinion).

Were they evangelical in trait? Not directly. On the surface, and politically, these acts were about giving Henry VIII more power. Yet each act moved the church in England further away from Catholicism and closer in line with Evangelical teachings.

Not many people are aware that Cromwell spent time in Europe, amongst people where non-conformist religious leanings were common. It is almost certain that he worked in Antwerp before 1512, where such discussions were common. In 1516, Cromwell even memorised the entirety of Erasmus’ (the humanist when that didn’t mean atheist) translation of the New Testament. Considering that Erasmus’ translation was one of the catalysts for Luther’s move away from Catholicism, this says a lot for Cromwell’s religious choices.

There is also evidence that Cromwell considered to work behind the scenes in favour of Evangelicals and non-conformists even while working in the Royal Court. He secured Lutheran writings by authors like Philipp Melancthon; had German literature translated by people living with him; and maintained contact with radical reformers in Northern Europe and Switzerland. In fact, this Evangelical leaning was enough for religious radicalism to be part of the case put to Henry VIII that resulted in Cromwell’s execution.

To further cement the Evangelical label on Cromwell, there are another two names we must take note of; Miles Coverdale and William Tyndale. These two men were Evangelicals who dedicated their lives to translating the Bible into English, even though that meant exile, and even death. Both were educated at Cambridge, a hotbed for religious reform, but ended up fleeing for their lives to Antwerp.

The importance of these two men is due to their contact with Cromwell. There is evidence that Cromwell was in contact with Tyndale, probably through his Antwerp connections, and Coverdale wrote to Cromwell for advice. Just your casual relationship with two men who provided the most crucial part to the growing Evangelical faith in England… an English Bible! If you were in any doubt about Cromwell’s faith, this confirms it for me.

According to Hebrews, a hero of faith is sure of what the future holds even though they cannot see it.

Was Cromwell sure of the future? I do not think that is a question I can answer right now. What I am sure of is that Thomas Cromwell did what he could from his position to help build a church that was based on the Bible rather than a man’s authority*. Though he was limited to a degree as the King’s man, this also gave him access to develop and influence laws that enabled more Evangelical preachers and clergy to operate openly and safely. He was involved in bringing and translating reformist literature to England, including an English Bible, which point towards an Evangelical faith.

I believe that Thomas Cromwell should be considered a hero of the faith and the English church. While not everything he did was good, the laws he was involved with and the men he supported became the foundation of Evangelicalism and eventually Protestantism in England. Considering the impact the Anglican Church and the main denominations that have split from it over the centuries have had globally, he is not someone we should forget.

Thomas Cromwell is an example of how we can do God’s work even when it is folly and madness to do it.

Then Mordecai told them to reply to Esther, “Do not think to yourself that in the king’s palace you will escape any more than all the other Jews. For if you keep silent at this time, relief and deliverance will rise for the Jews from another place, but you and your father’s house will perish. And who knows whether you have not come to the kingdom for such a time as this?”