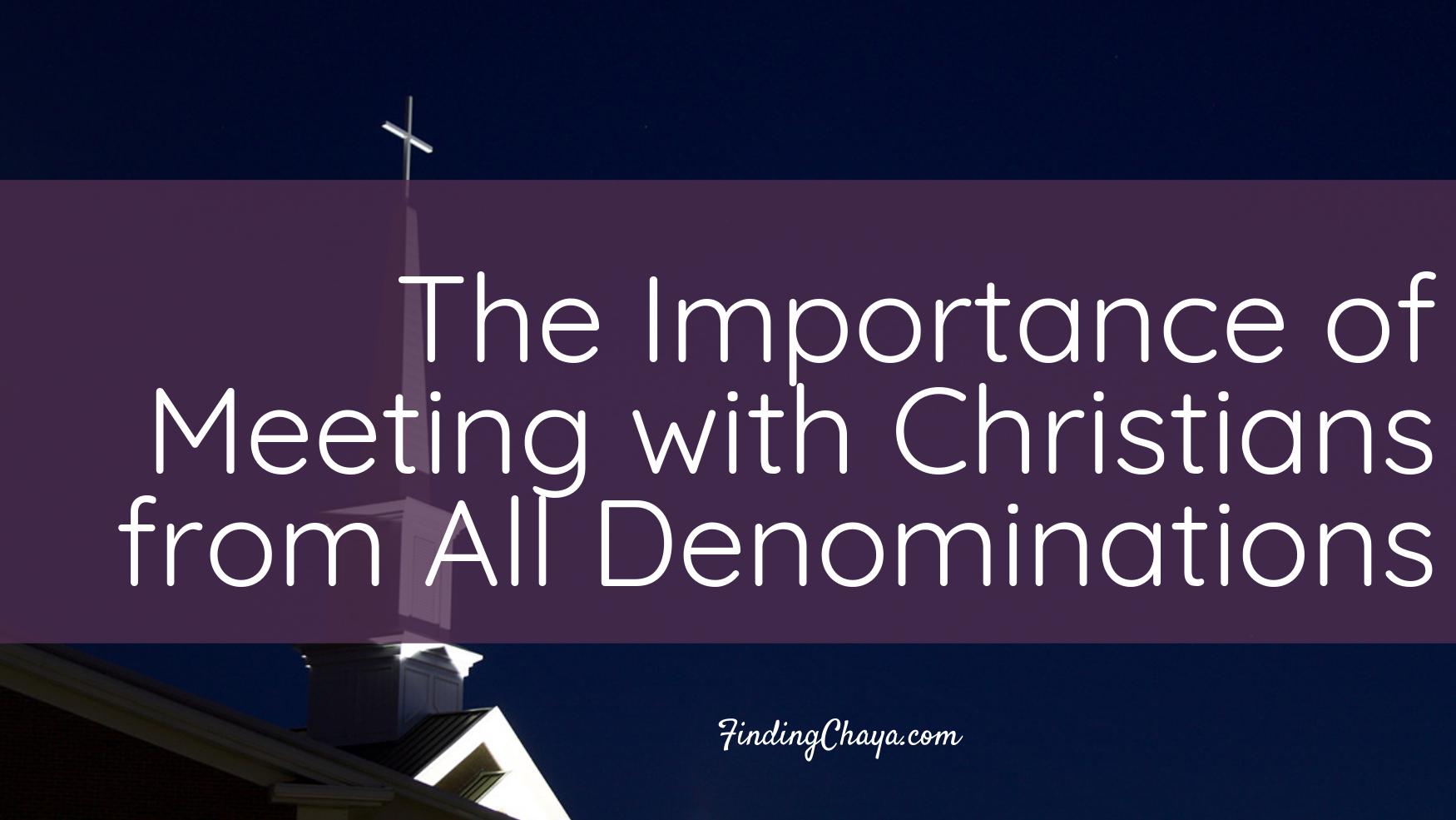 As I began to plan this post, I was really conscious it was a Wednesday night. You see, Wednesday night means tomorrow is Thursday, which means that in 14 hours time I’ll be heading over to our non-denominational-but-multi-denominations lunchtime fellowship group.

It’s a unique group. We’re a crazy bunch of individuals and, even by the Christian norms I’ve been raised with, you wouldn’t expect to see us all sat down together discussing the Bible. First of all, the two guys who lead the group are an Anglo-Catholic and a Conservative Evangelical. Not exactly two theologies that you would normally see together. Yet somehow when we’re studying our way through Acts, this provides a great balance for our discussion.

And trust me, we need that balance. Within the group there are mature Christians from charismatic, evangelical, and catholic backgrounds; those who are only at the start of the journey with Christ; and people who are still deciding whether or not they can believe in this guy called Jesus. Yes, this presents us with a lot of challenges but also opportunities.

From a personal point of view, it has forced me to look at whether I overcomplicate things and whether I base my arguments on the Bible or on experiences. It’s also one of the few groups where there is truly no such thing as a stupid question. In particular, those who haven’t grown up as Christians don’t come with a lot of the assumptions that those of who are “cradle Christians” bring. This means they ask the questions the rest of us wouldn’t think to ask. The result? We are all forced to think through our assumptions, going back to Scripture over and over again.

I joined this group in May 2018 but my feelings about denominations have changed throughout my whole life. Though I was raised with a worldview/mindset of “I’m just a Christian” as opposed to being Anglican (I was raised in the Church of England), I still had a lot of assumptions as a young teen. The most prevalent of these was that if you were a Catholic, then you weren’t a proper Christian. I remember talking with my mum about this while watching The Royal because of a Catholic storyline. She told me stories about some of the Christians she had met in Europe. They belonged to the Roman Catholic Church but the way they lived out their faith proved that they were Christians; that Jesus came first for them. In the same way, I have seen CofE churches being run by people who were wonderful individuals but nothing in how they lived indicated that they had a relationship with Jesus. While I cannot know where they were with Jesus, it was a real wake up call for me about how church attendance at a particular church does not make you a Christian.

In 2013, just as I started my old blog, I switched denominations. Not intentionally. It was more because the Baptist church in town was the only church that had a style of worship that I liked and that my parents didn’t attend. It was the whole “moving back home after university but not wanting to be a kid again” thing and leaving the church I get up in was part of that. So I went from Anglican to Baptist. Though not a lot changed, I did struggle with communion at first (like, when do you have the bread or wine if you’re not queuing for it???).

For four years after that, I put any questions about denominations behind me unless I was discussing them with a friend who was in training for Anglican ministry. He’d been raised as an Evangelical Anglican but his Church was more towards the High Anglican/Anglo-Catholic end of the spectrum so we’d discuss how he was finding his line in the sand. It showed to me how even within the same denomination, theology and tradition played a massive role in how we practice our faith.

During this time, I got massively into podcasts. I started with some evangelical ones but slowly branched off in an attempt to listen to as many voices as possible. I also sought out ones on simple living. This led me to Simple, hosted by Tsh Oxenrider and a selection of co-hosts. Tsh currently attends an Anglican church in Texas, which uses a lot more liturgy than the lower Anglican churches I attended in my late teens and twenties did. This often came up as a topic when she was joined by Haley Stewart, a Catholic convert, and eventually they did a whole series on liturgy and the liturgical calendar.

Though I had grown up with liturgy (how else does a 12 year old accidentally quote The Greatest Commandment in an RS essay but not know you need the Bible reference?), I had never felt any desire to be connected to it. Haley and Tsh’s discussions ignited in me two things: 1) a curiosity over the liturgy of the tradition I was raised in, namely Anglicanism, and 2) what did Catholics actually practice as opposed to what I assumed they practiced. So I started to listen to Haley’s podcast, Fountains of Carrots, and brought myself a copy of The Book of Common Prayer.

Though I took a break from both podcasts (I needed to seriously de-Americanise my influences), they instilled in me a curiosity about how Christians from different denominations to me practiced their faith.

By 2018, I was attending an Evangelical Church. First of all, calling a church Evangelical says what theology it holds to. Evangelical is NOT a denomination so technically it is a non-denominational church, though it is linked into FIEC. Being part of a church that has fantastic Bible teaching, a strong community, and a mix of ages including those in their twenties has been amazing. I love my church and when I can’t make it on a Sunday, I can feel it in my heart.

However, it has taught me that even amongst Evangelicals there is a huge spectrum. Do I agree with everything that is taught? No. Is that okay? As far as I know, yes… so long as there are open discussions when disagreements happen. More importantly, it has taught me the dangers of staying within one part of the Church and never being in discussion with those who interpret Scripture or practice faith differently. When everyone in a group thinks the same way, you will only ever look at a text in one way. This applies to the Bible. Having that one person who looks at a text differently will force everyone else to also look at it in a different way. This is not a bad thing in Bible study so long as you always come back to what does the Bible say, not what do my traditions and assumptions say it says.

It All Started with the Catholic Church

I’m trying to figure out how to conclude what has ended up being a rambling post. (Honestly, I do plan some of these posts to try and make them less ramble-y.) I do not think this is a new idea. If we look at the Nicene Creed (dating back to the 4th Century), it refers to “one holy catholic and apostolic Church”. This isn’t referring to the Roman Catholic Church. Rather, it refers to the original meaning of the word catholic (from the Greek adjective καθολικός (katholikos)), which translates to “on the whole” or “universal”. In other words, you could read it as “We/I believe in the one holy, whole, apostolic church”.

So, from where I’m standing, one of the fundamental creeds that has been used across denominations, theologies, and traditions for over a THOUSAND years refers to the WHOLE Church. Not just the people who agree with us 90% of the time. It comes down to this core message:

If you believe that Jesus Christ died for your (and the world’s) sins, died on the cross, was buried, and then raised from the dead after three days, you are part of the same Church as me.

While issues around women in leadership, same-sex relationships, creation care, and evolution do matter, these should not keep us separated from each other when we acknowledge that Jesus died to save us from our sins AND defeated death through the resurrection.God did not intend for His Church, His bride, to be split up. He didn’t want us to be arguing to the extent that we cannot see the plank of wood in our own (denomination’s) eye. There are differences between the denominations and some of them do need to be assessed because they are about the Gospel. However, some of those differences are about things like styles of worship or the order of a service, which aren’t worth the break up of God’s Church.

Maybe, just maybe, if we stopped looking for the flaws in each others’ denominations, theologies, and traditions, we would start to see the flecks of gold in them.