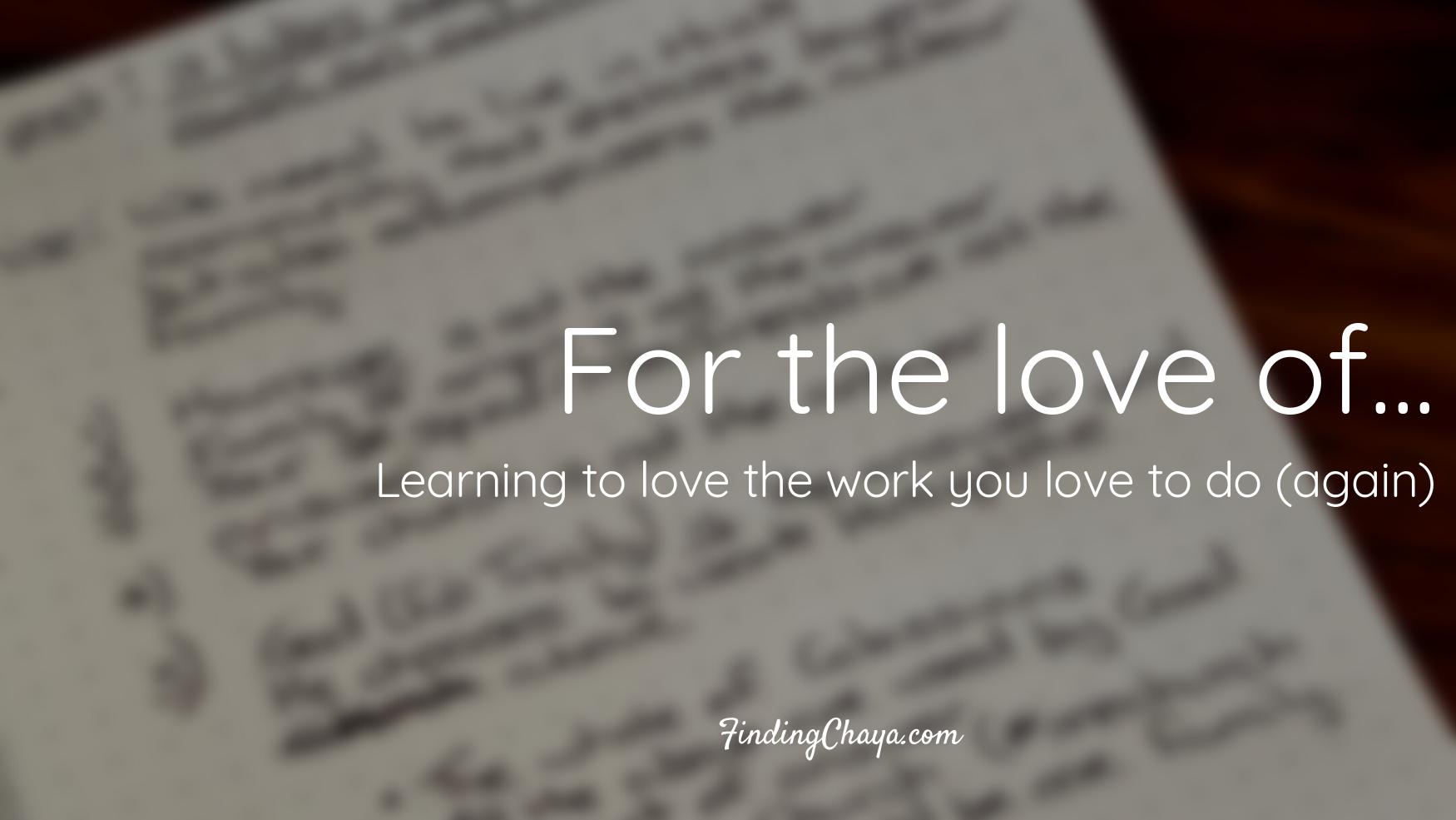 How would you finish a sentence that began “For the love of…”? Automatically, I want to finish it with “all that is holy” even though I know how blasphemous it sounds.

You probably chose a similar ending – something that conveys shock, surprise, or maybe disappointment. But may I suggest a different ending?

Or maybe you’d like to put in a different word. Dancing, performing, chess, nature, travelling would all work. The key here is that it has to be something you love because this is an answer to a question:

Why do you do what you do?

I’m not talking about your job or employment or daily work though those could be your answer. I’m talking about what it is that you do because you love doing it.

For me, it was writing. Especially writing about my life as a Christian; figuring out how the Bible applies to 21st-century life and how everyday things have helped me do it. From the Gospel explored via Thor and Harry Potter through to using food to understand parables writing was like breathing to me.

No longer loving it

Over the past year, I have struggled with writing. It no longer feels like breathing. Rather it has become laboured, like walking in the Fells on a meltingly hot and sweaty day. When I have made it to the mountaintop, the view has been beautiful. However, I have all too often given up before I reached the summit.

The most recent example of this is the latest in my series on Marvel. What started as a fun project for lockdown (obviously during the ‘hero’ phase of 2020) has become hard work. My post on Thor required a complete rewrite. Repentance in Iron Man 3 is currently languishing in my Google Drive.

That’s not to say I haven’t written anything. I’ve gotten reflective over on my personal Instagram. A few non-Marvel posts have appeared on here too. However, the truth is that once again I got blinkered. Between a pandemic, changes in my life and a dogged determination to use movies to explain the Gospel, somewhere I stopped writing for the love of writing.

I, fortunately, have a very sensible and occasionally wise boyfriend. When he pointed out that maybe I had become too focused on finishing this one post things made sense. I still had multiple ideas floating around my head but was so fixated on Iron Man 3 that I struggled to write anything else. Maybe I needed to move to the next film… or even (this was his suggestion) step away from the MCU for a while.

Already I am having more ideas and actually noting some down. There is this post I’m writing right now; another one on why adults need thick community partially drafted in my notebook; another inspired by ‘Just around the riverbend’ from Pocahontas semi-formed in my mind. I am able to give room in my head to Finding Chaya without Tony Stark and Pepper Potts popping up. It really is a fantastic feeling.

Learning to love the work again

So what’s the takeaway from taking off my Exploring through the MCU blinkers? Other than learning the same lesson again – that I’m not great with writing a series!

There are two things really that I, and hopefully we, can take away from these months of me moaning rather than actually writing. First up is the obvious one; don’t hold something so tightly that you end up crushing it. I was becoming so obsessed with Exploring through the MCU that I was crushing Finding Chaya. No doubt COVID brain was connected but I reached a point where I was so determined to finish a post that I couldn’t write anything else. I was going in a spiral.

Secondly, work is good but to work for the wrong reason is bad. While we sometimes need to work from necessity (to earn money to buy food, pay bills, etc), we also need to do work that we do out of love for that work. You could be one of the lucky ones who is paid to do something you love. (In which case, go celebrate! With cake!) But more likely it is that you do something else alongside your main job because you love it. My boyfriend plays chess. My sister is involved in dance and theatre. I have friends who knit, paint, do carpentry and look after their garden. These are all things they do for the pure reason that there is something about these particular forms of “work” they love.

We love to work because, as Genesis 1 says, we are made in the image of the God who created – who worked to create the earth we live on. But when the love dries up – it will do at least once, no matter how temporarily – we need to remember what else the Bible says about work.

For we are his workmanship, created in Christ Jesus for good works, which God prepared beforehand, that we should walk in them.

Whatever you do, work honestly, as for the Lord and not for men, knowing that from the Lord you will receive the inheritance as your reward. You are serving the Lord Christ.

Humans were created to work and to create. That’s why so many of us have hobbies and interests and side hustles and projects – something in us wills us to work at the things that we love. But for Christians, there is more that motivates us to work and create. God created us through Jesus to do work that is good and to do it for Him.

So why do I do the work I love? For the love of the God who created me to do that good work.