Being socially anxious and overcoming it 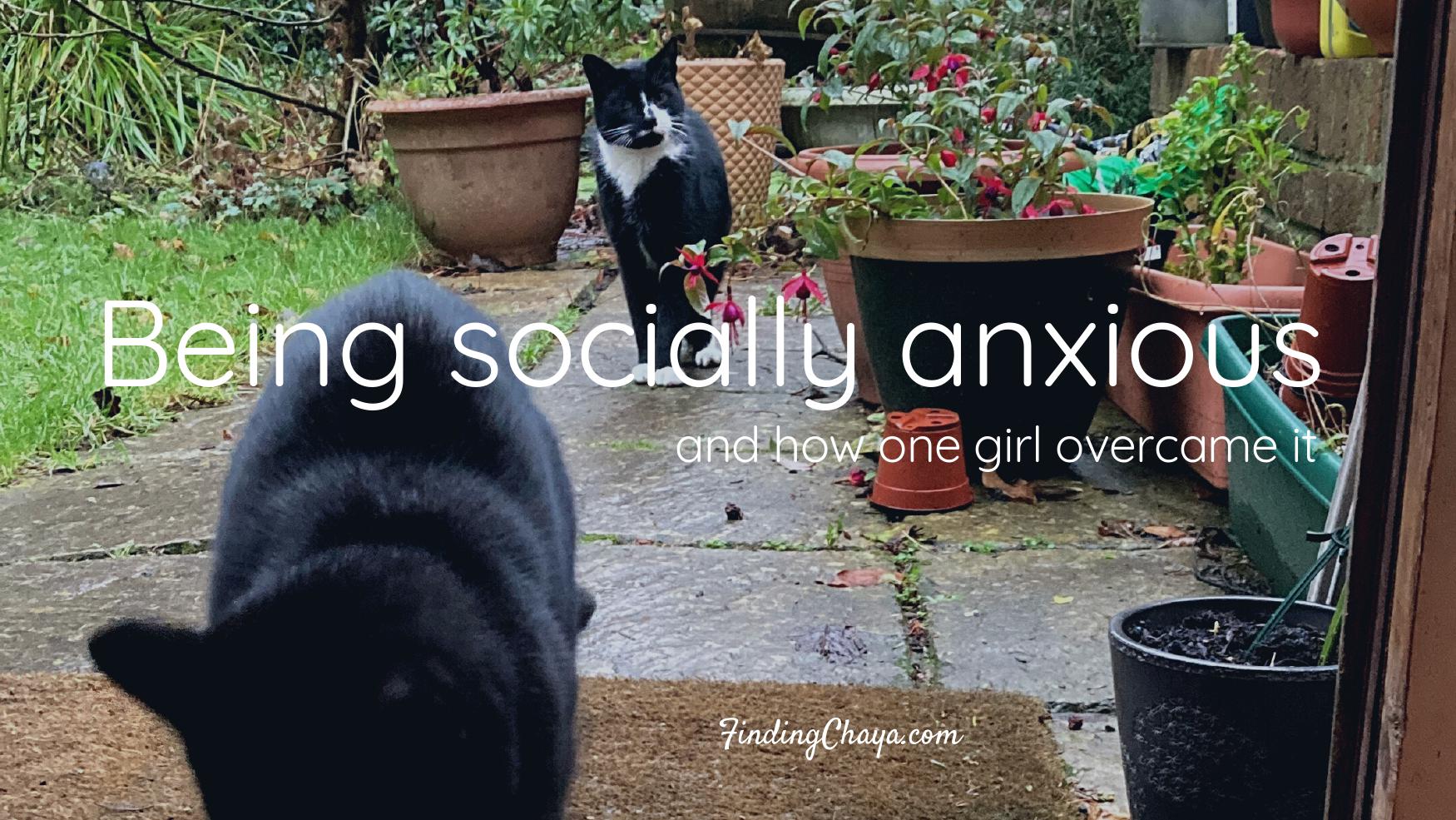 This is an old post… as in from my last blog, which I closed down at the end of 2017 in order to launch Finding Chaya. So why revisit it now? Because once again I am finding myself moving to a city to be part of a large church where one service is double the size of my last church’s whole congregation. As someone who struggles with meeting new people and assumes a lot of things that aren’t true, starting at a new church is difficult. And yes, even if you are going with someone who has been part of that church for years (as is the case this time) it is still difficult.

I’m dealing anew with feelings of anxiousness and the assumption that everyone is judging me as the “new person”. To be fair, that probably says more about me than it does about them and I’m working on it. So, it seemed like it might be useful for me to look back at when I’ve had to face similar challenges before, knowing that I overcame them. If you see yourself as a socially anxious tea-hugger too, I hope this helps.

The idea for this post was the result of the Young Adults Weekend Away with my church. A whole weekend of spending time with people my age.

The problem was I knew very few young adults in my church. Plus everybody was in clusters (our version of small group communities). The thought of trying to join ready-made friendship groups made the weekend one big, socially anxious, disaster waiting to happen.

I love my church. I love the teaching and worship and focus on doing good things. But as someone who prefers to close people out, I have found the community emphasis really difficult. It’s not just about meeting midweek and doing a bible study. Here, the midweek communities are about fostering friendships, supporting each other and then doing outreach as a group. That requires openness and confidence, neither of which I’m very good at.

The problem isn’t that I’m introverted, though I would love to blame that part of my personality. It is that I have mucked up by doing or saying the wrong thing socially so often, I don’t trust myself with new people. I would much rather watch from the sidelines, cradling a fruit tea in my hands. Or at least until someone spots the anxious tea-hugger in the corner and says hi to me.

In any church, being a socially awkward tea-hugger is not great. In a big church, it spells disaster for fitting in. No one knows everyone so 95% of the congregation won’t know you are new. Everyone has friends already, and often strong friendships, so won’t think to reach out to new people when talking during coffee time. Even when you do become part of a small group, it still takes time to meet people outside of that group.

Can churches, particularly big churches, do anything to make life easier for the anxious tea hugger? Aside from having an easy access welcome point and getting newcomers into small groups ASAP, probably not. It is the people like me who need to make the change.

The Saturday evening of the weekend away was when I realised this. I had gone up for prayer because of my general anxiousness over meeting new people. Phoebe offered to pray for me. Everything she said about knowing I had a great cluster (I’m in a non-young adults cluster), needing to accept the community’s support, that I was loved regardless, was totally on point. Then, after I’d stopped crying (I’m such an awful cryer when being prayed for. Snot everywhere!), she invited me to her lodge for cake and wine. I said yes (eventually) and it was the best decision of the weekend. I was welcomed and made to feel comfortable (as much as I allowed myself to be).

I had a glimpse of what community could really look like. The shocking part was that I liked what I saw. People who cared for and loved each other, as genuine sisters and brothers in Christ.

I wanted to be part of it. I saw what community could look like and I craved it.

I’m still a work in progress. Let’s not lie about this. I have made some progress. I’m a lot closer to my cell and cluster, to the point that I felt able to discuss both my love life and potential jobs with them. My one close friend in Young Adults has informed me that I have to have a sofa bed wherever I move to because she WILL be visiting me. It seems that I’m starting to be part of the community that I realised I was craving.

Even more amazing, I asked one of the girls I met on the weekend away if she wanted to grab a drink sometime. I actually ended up having dinner round at hers and spending hours discussing everything from what books we read through to being gluten-free and other food lifestyles (it is me so food was bound to come up).

The biggest achievement of these past two months is how much I’ve noticed my social-anxious-awkwardness come down. Yes, now we only have morning services, and therefore a new congregation to navigate, I do hunt out my cell group to sit with them. After all, there is safety in numbers… and I don’t have to introduce myself to someone new again. But now, when I do stay for tea after the service, I recognise people. I can smile at them without feeling weird. I might even say hi to someone I’ve only spoken to briefly twice.

The anxious tea hugger is still inside me. Only now she has to compete with this other girl, who craves community, doesn’t want to shut people out and is learning how to smile from the inside. Walking into church each Sunday is still an internal battle over whether I stay afterwards or not. The only difference is that I’ve changed my allegiance to the girl who wants community, not the girl who lets being anxious block out people.

It’s four years since that weekend away. It’s four years since I left a big city church and returned to smaller(ish) churches of 250 people max. In some ways I have reverted, going back to a place where big crowds are intimidating. I’m definitely happiest with a cup of something hot to hold after church.

Now I’m re-entering a big church (admittedly with a fiance, which makes the process easier) and facing up to my feelings and experiences of large groups. I mean, I may have had a little cry the first time I had to walk into the 20s and 30s meeting on my own – I’m almost 30 and yet walking into a room of over 50 people when I don’t know most of them is still a little scary. The important thing to remember is that I still walked into that room and sat at a table not expecting to know anyone. (Fortunately, God is good and I accidentally sat down with people in my small group.)

Do I still get anxious when I’m in a new situation? Yes! Is being in a bigger city church again a little disorientating, even as I do get to know people? Most definitely – so many faces and bodies navigate around and names to remember. But I’ve also learnt a lot during the four years between that I’m bringing with me this time. Because as much as the anxious tea hugger is still in me, she’s most definitely losing to the girl who craves community.

How to choose community over anxiously hugging your tea

First of all, you have to want that community. If you do not want to be in a community, then you are never going to fight for it. And trust me, you are going to have to fight against the anxious tea-hugger tendency more than you realise. Also, if you are not interested in being part of a loving community I really have to ask why you stepped into a church in the first place?

Secondly – and this is the really scary part – choose to join in with the community somehow. If you are more comfortable in large groups then ask around to see what people do. Join any groups on social media attached to the church to see what events are happening. Since I’ve joined my church I’ve gone on the 20s and 30s weekend away, seen people share open invites to various activities or events, and been added to a board games WhatsApp group. I might not know everyone in these groups but I’m opening up my options for meeting other people. For those who prefer big groups, this is one way into the church community beyond Sunday services.

If you prefer smaller groups or even just hanging out with one person, get into your church’s version of a small group. I will admit that this is my preference. Not only is a small group less intimidating for me but it also means I can get to know the other people in the group much more easily. From there, it doesn’t feel as big a jump to suggest grabbing a coffee or drink with one or two people. According to Mr FC, this is more of a girl thing but I really think the guys are missing a trick or two by not adopting it.

The main thing here is to just keep showing up. Whether you show up to big or small groups, being part of a community only happens when you are there.