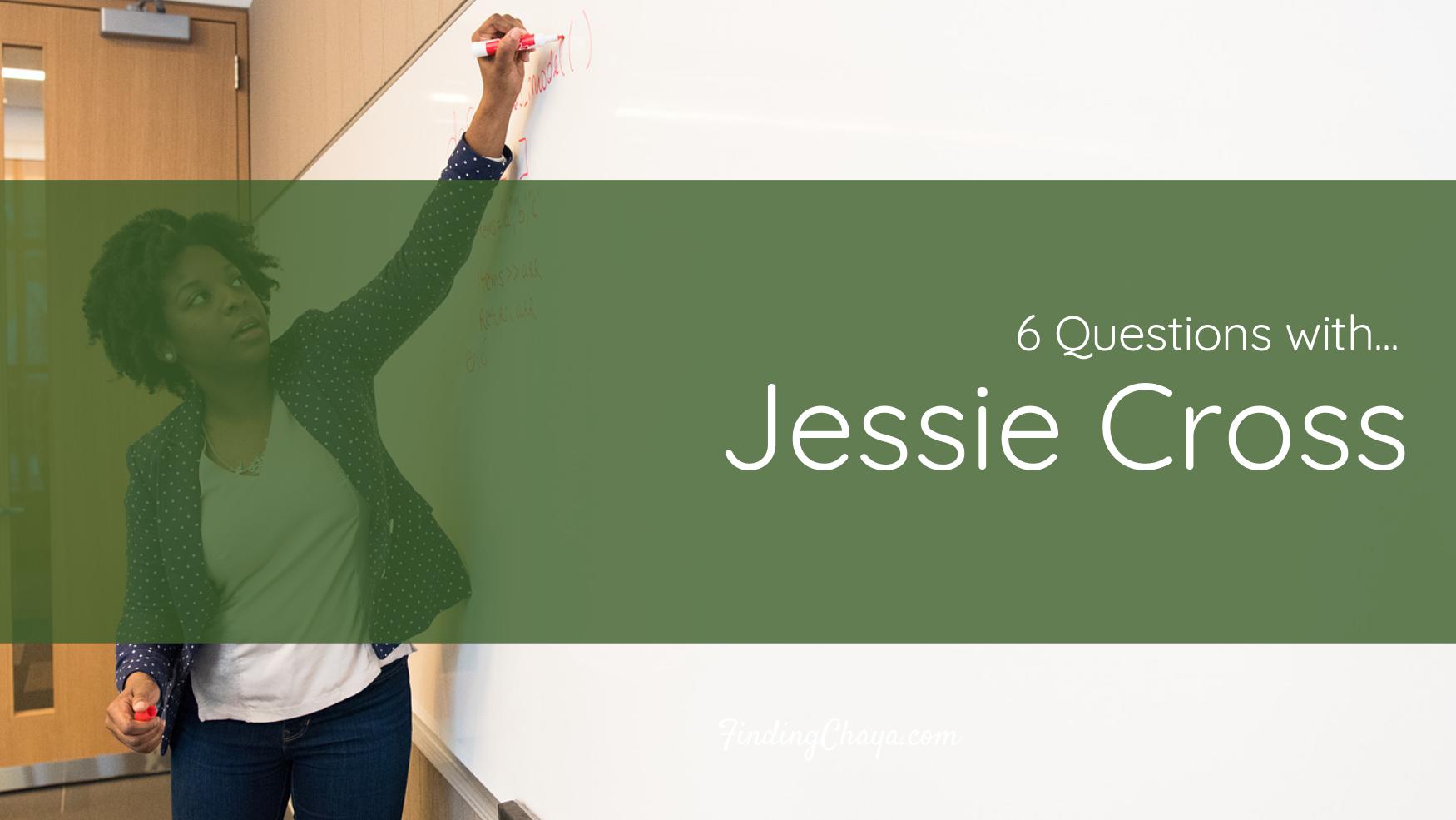 This week I’m putting Jessie Cross in the hot seat. I have had the privilege of knowing Jessie for over a decade, from crazy Soul Survivor memories to making it through university together. And now she’s agreed to come on Finding Chaya to answer six questions about her life as a teacher in London. So here we go, 6 Questions with Jessie Cross…

I’m always telling my pupils to paint a picture with their words… Now’s my chance to practise what I preach- or teach. First and foremost I’m a Christian, but I am aware that that word will paint a very specific image in lots of people’s minds and it may not be accurate! But there it is, the most important thing about me. Secondly, I am a teacher. My feelings about Christianity and teaching have both been challenged over the years and I am very pleased to say my faith and my job remain intact. I am an ENFP type and my top love languages are acts of service and quality time. Clearly, I am the sort of person that cares about Myers-Briggs and love languages… That’s quite new for me though. I’ve always been bouncy, and the way to my heart is through cups of tea and cheese. I enjoy interesting films, reading, bouldering, swimming, cooking, board games and dancing embarrassingly around my room. I’m a bit of a worrier, but I’m working on that. I’m engaged to the lovely Joel and, sorry to brag, I am fortunate to be friends with the best people the world has to offer.

2) You’ve been teaching in London for the past five years, though you’re about to move out. What has been the biggest lesson that you’ve learnt from those five years?

I cannot even begin to describe the whirlwind that teaching has been. I have completely changed as a person since I started. It hasn’t been easy. I would say the most important lesson I have learned is that the way people behave is very often not about the person they are behaving to. Children acting up, being defiant and speaking rudely are often hurting or trying to save face. It’s usually nothing to do with me. No-one wins if I then let myself rise to it, and treating children with firmness but kindness may involve swallowing my pride, but also does salvage a relationship. Similarly, parents who have behaved appallingly to me (I’ve been shouted at, sworn at etc) are often frightened, anxious and see me as another authority figure that is working against them. Again, no-one wins if I am rude or passive-aggressive back. Being kind and gracious in those situations can be INCREDIBLY hard but builds a relationship more than tearing it down even more. I’ve also learned as a result of these experiences that even an overly- sensitive person like me can be brave and face these things head on… And then cry in a cupboard afterwards.

3) What was it about teaching that due you to not only an intense career, that requires a lot more work than many people realise, but to start it in a challenging environment?

I think idealism drew me to working as a teacher in London. My degree was in education and I learned about the history and philosophy of education, with a bit of child psychology. The most interesting part for me was the sociology of education. How relatively new it is, how society has shaped it, how our schools model factories, how we have had to change and adapt education to make it somewhere that is inclusive to all, and yet there are still so many that can’t reach their full potential in the system. However, I would say that I went into my career rather naïvely. A lone teacher cannot address the shocking inequalities in the country. There needs to be larger-scale, societal change, I think. Making a difference in a challenging area does not happen instantly and certainly doesn’t feel like the big spectacle I was hoping for. No medals in this job! Making a difference has been more often about small actions, being consistent, and turning up everyday hopeful, even if all your experiences so far have taught you to be otherwise. I may never know the difference I have made!

4) London is incredibly different to the small, relatively rural, town that we lived in as teenagers. Did you get culture shock when you moved there and do you think you will have to readjust again when you leave?

I had massive culture shock when I arrived, but having spent a year living in a different country when I was 18/19, I knew I would adjust. Growing up in Wiltshire was an absolute TREAT and I have realised over and over again in my life what a privilege it was. The areas in London I have lived aren’t quite as green and hilly, but any time I’ve been tempted to think badly of them, I have to remind myself that many people make a life in these areas and it can be a good one. So I’ve made an effort to find beauty in my neighbourhoods. I’ve also had to try not to be too hard on myself for preferring green space; it’s what I’m used to. Some people would hate the idea of living in sticks, and either way, the feeling of discomfort in a new place is part and parcel of life! Moving to Brighton, the main thing will be forgiving myself for moving out of East London. Teaching here has been tough and I had to make a choice between living in London and teaching- both in combination were making me unwell. I would love to be tougher, but there’s something very humbling and freeing about accepting your weaknesses!

5) You’re one of the friendliest people I know and seem to always have time for your friends. How do you manage your time to invest in these friendships while also ensuring you are able to be part of a church, everything that teaching involves, and get enough sleep?

As previously mentioned, I’m a bit of an anxious person and I’ve realised something about balancing time. If I wait until my to-do list is done, I will never have time to do anything else. In teaching, your work is quite self directed and teachers love to get better at what they do, so we’re very good at adding to our to-do lists. I’ve had to learn to choose to take time to do relaxing/fun things even with jobs to do, so that my mind and body can stop for a few hours. And so with my friendships, I really couldn’t get by without them. It can be tough to find time for everyone, but it’s memories with my friends and the friendships I’ve built that are one of the key things to get me through. Also, as previously mentioned (again!) my friends are the best people in the world. Honestly, hanging out with them is so much more fun than a lot of my to-do list. They are my most precious commodity… Not that I own them, and I am inspired by them all the time. I only hope that I give as much back to my friends as they give to me.

6) You’re now also adopting a vegetarian/flexitarian approach to food and eating. What was the motivation for the change and did your faith have an impact on that choice?

I’ve been trying to eat less meat for a while and it is significantly easier since Joel came on the scene… He’s much better at sticking to things than I am. We decided to do this based on the environmental impact that meat farming has. It’s a tough time to make any kind of big choice like this, because for every bit of evidence to say that it is a good idea, there will also be several passionately written articles arguing the opposite. So that’s where my faith comes in. I may be wrong; perhaps what I am doing makes no difference. It’s certainly not a black and white issue. But I want to know that my lifestyle is not further damaging the life and planet we’ve got. I want to serve God with my life and eating less meat is part of that for me. There’s definitely more we could do and when we’re married and our finances merge (scary thought) Joel and I plan to research where best to give money so it’ll make a difference and how to live our lives in a way that creates less waste.