Can Christians Read and Watch Gothic, Supernatural, and Fantasy Stories? 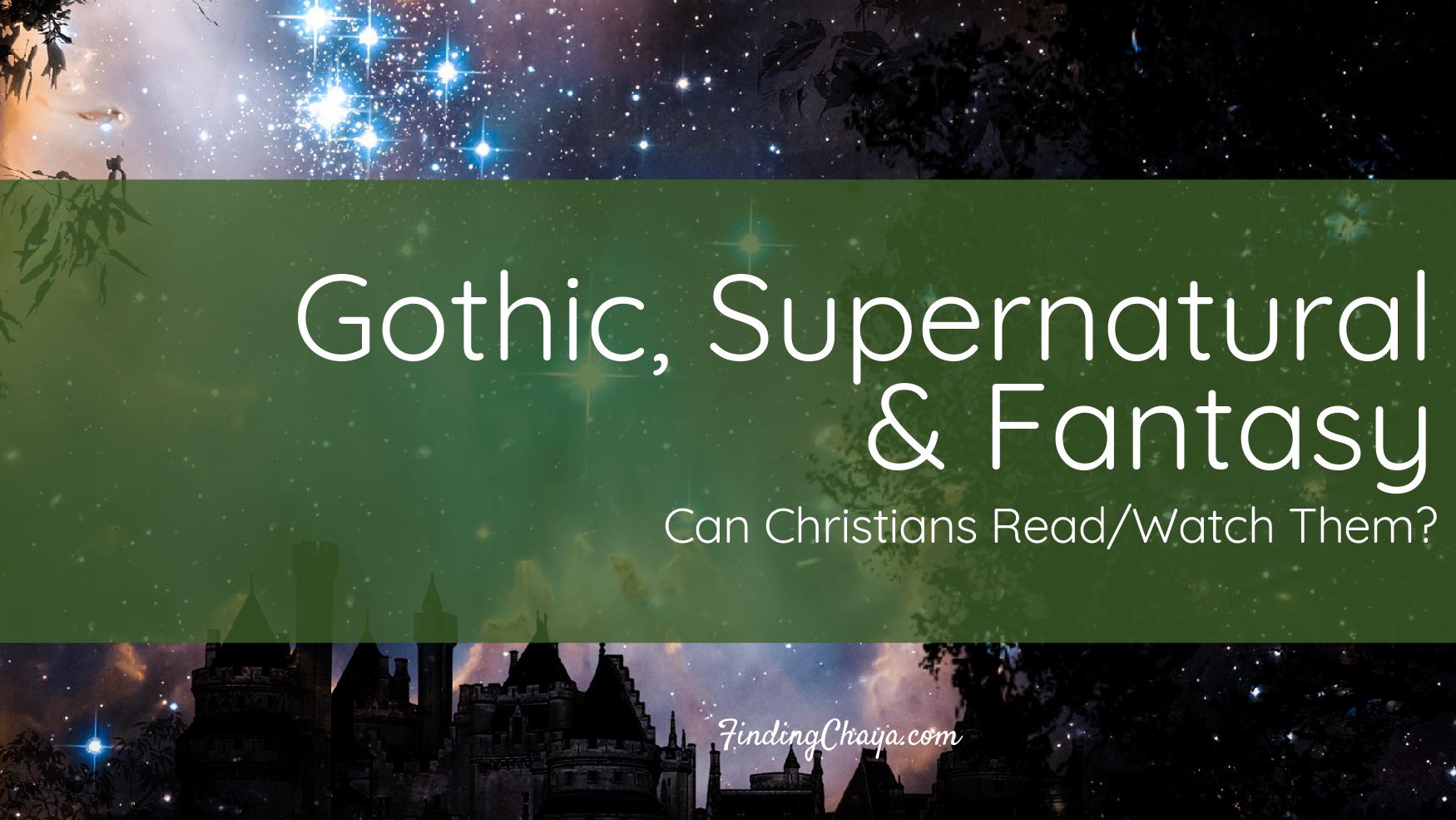 As a child, I didn’t read a lot of fiction. Well, I didn’t until I was 8 years old and my mum introduced me to Harry Potter and the Philosopher’s Stone. After that, I was off to explore as many fantasy worlds as I could… King Arthur and the Knights of the Round Table, (some of) The Chronicles of Narnia, Song of the Lioness, Percy Jackson, and many more. Eventually, I tackled Dracula and spin-off/unofficial sequel The Historian, with other gothic classics making it to the to-be-read list.

My fondness for the supernatural, fantasy and gothic genres didn’t stop at the written page either. Charmed, Buffy the Vampire Slayer, The Vampire Diaries, Lord of the Rings, The Frankenstein Chronicles, Shadow Hunters, and the list goes on. I mean, you may have noticed I have a fondness for referencing Once Upon A Time ALL THE TIME.

With all these books, films, and TV series, I’ve always had an awareness of what does my life for fictional worlds of fantasy, supernatural and the gothic means for my life as a Christian. When I’m consuming so much about magic and good vs. evil and otherworldly creatures, what will be the impact in my real life? It started when my mum insisted on reading the Harry Potter series to make sure they were appropriate. Then I wasn’t allowed to read The Northern Lights as a child. (I did read it as a teen and frankly wasn’t impressed with the story.) Later on, in Sixth Form, I started to realise that I wasn’t comfortable watching shows like Charmed or reading books like Wicca because they were too close to reality for me. I started to draw my own line between what I felt comfortable reading/watching and what I wasn’t comfortable with.

A Desire to Understand and Explain

First of all, we need to know that we are talking about three different but related genres. Each has its own characteristics and these are vital to understand.

There are elements of overlap between each genre. Dracula has been subsumed into the supernatural tales while Dr Jekyll and Mr Hyde and Frankenstein have been integrated into Once Upon A Time, a fantasy TV show. The Harry Potter series fits the idea of supernatural tales but the use of a school in a castle, the massive separation between Wizards and Muggles, and the inclusion of fantastic magical creatures gives it all the feel of a fantasy story.

However, the key thing at the heart of each of these genres is that they are asking questions. Predominantly, they are exploring questions around humanity, e.g. what it means to be human. They simply use elements and tools that require us to use our imaginations much more to do so.

Drawing the Line in the Sand

No doubt you have your own opinions and biases about these three genres. They may vary from simply not being interested in tales set in a world with elves or vampires through to feeling that watching shows featuring magic and supernatural creatures is unhelpful or unhealthy. You probably have your own line in the sand for what you are happy to read/watch and what you are not.

It’s the 2008. I’m finally catching up on the 90s/00s shows that my parents didn’t let me watch as a kid. Buffy the Vampire Slayer and Charmed are top of that list. (You can probably guess why my parents didn’t encourage them.) I binge-watch Buffy and I enjoy it. The vampires are suitably scary but clearly not real; even when witches are included, the “Buffy-verse” is fantastical and clearly not the world I live in. There is no way that I’m going to accidentally come across a vampire or werewolf. Charmed, in contrast, begins as a binge but I find myself getting too curious. The three main characters are witches but it is couched in terms of Wicca, which is recognised religion today with links to “white witchcraft”. About two seasons in (4-5 days hard binging maximum), I chose to stop watching. My binging had started an interest in something that isn’t just not from God but is against Him.

I could have used multiple different books and TV shows in that example. To me, the Harry Potter series is very clearly set in a fantasy world even if it does look very similar to 80s/90s Britain. I chose not to watch the new Chilling Adventures of Sabrina because it dealt with witches and the devil in a way that felt too close to reality. The same was true for Salem, which I found a shame as I find the history around Salem really interesting. But I adore the House of Night series, which draws on pagan practices but is about vampyres and is clearly not the world I know. Not sure the last time I heard of someone becoming a vampyre via a genetic change!

If a story feels real enough that it could happen, I do not want to watch or read it. For me as a Christian witchcraft, paganism, sorcery, or whatever you want to call it are very real. If a show designed to entertain me portrays them too realistically, I will turn off the TV.

Can I Read or Watch That?

That’s the question we want to answer. Can we as Christians watch these things with a clean conscience and with a Biblical approach? Obviously the only way to know the answer to that is go to the closest thing we have to God speaking himself…

There are two passages in the Bible that I think really speak into this question of what is acceptable for us to read, watch, or consume in other ways:

In Matthew 15, starting at verse 10, Jesus is talking about what defiles a person. He is talking to the Pharisees, whom he had just been debating commandments and traditions with because his disciples didn’t clean their hands before eating. The point he is making? That it doesn’t matter whether or not you eat with dirty hands. What matters is the way you speak, think, and act; that is what tells people whether you are clean or dirty (defiled).

Philippians 4 contrasts with this. Paul is finishing off his letter to the Philippians with an encouragement to rejoice in God and a request that two Christian women stop arguing. To then follow it with this verse on what to focus our thoughts on seems very pointed.  Paul appears to be at the very least implying to his readers, i.e. the Church in Philippi, to not focus on what is negative or unholy around them (like an argument between church members). Instead, he encourages them to focus on that are “worthy of praise” (like God and Jesus!).

These two passages seem to be quite opposite. One supports the idea that you can consume anything because it is what comes out, not goes in, that matters. The other is all about what goes in. The reality is that they need each other, like a well-balanced see-saw.

I know it’s gross but we know it is true. You have a cake-fuelled weekend, with little to no other food. You will pay for it when you try to go for your Monday morning poo. (I see those wrinkled noses ladies but we’re all human here… unless cats can read after all!)

Your mind and heart are the same. What we put into our mind and heart will replicate what comes out. If you’re any level of fangirl about anything, you know what I mean. When Once Upon A Time Season 7 was just out, all I wanted to do was talk about what the heck Henry Mills thought he was doing. I was feeding my mind with fantasy TV. What came out of my mouth reflected this; I was either theorising with friends or trying to persuade them to watch OUAT so we could then theorise.

So, to conclude like the good history student I once was, it is what comes out that matters. The things we say, do and think are what mark us out as Christians and Jesus’ disciples. You can read Harry Potter and watch Charmed or even attend comic-cons dressed as the Evil Queen (one day I’ll make it happen) and be a Christian.

However, that does not mean that what you watch, read, etc. will not effect us. It will effect you. This might mean that you simply get super keen and tag your friends in every related meme going. It might also mean that you find yourself looking things up on the internet that are not of God. This could be as seemly innocent as the historical roots of Wicca all the way through to moving into subcultures that effectively bring elements of these genres into reality.

You Can Eat the Cake but be Wise About It.

We decided what we can read and watch. God provides us with guidance through His word but at the end of the day this is something that He leaves up to us. I know Christians who have absolutely no problem with Charmed while my parents had no issue with me reading Dracula. Equally, I know Christians who won’t touch Harry Potter with a barge pole. They have decided where their lines in the sand are. My hope is that you will also decide where your line in the sand is.

There are just two things I want you to remember when you are enjoying the fantasy/supernatural/gothic films, TV series, books, graphic novels, and other media: