Sourdough in the Bible || The Role of Fermentation in Jesus’ Parables 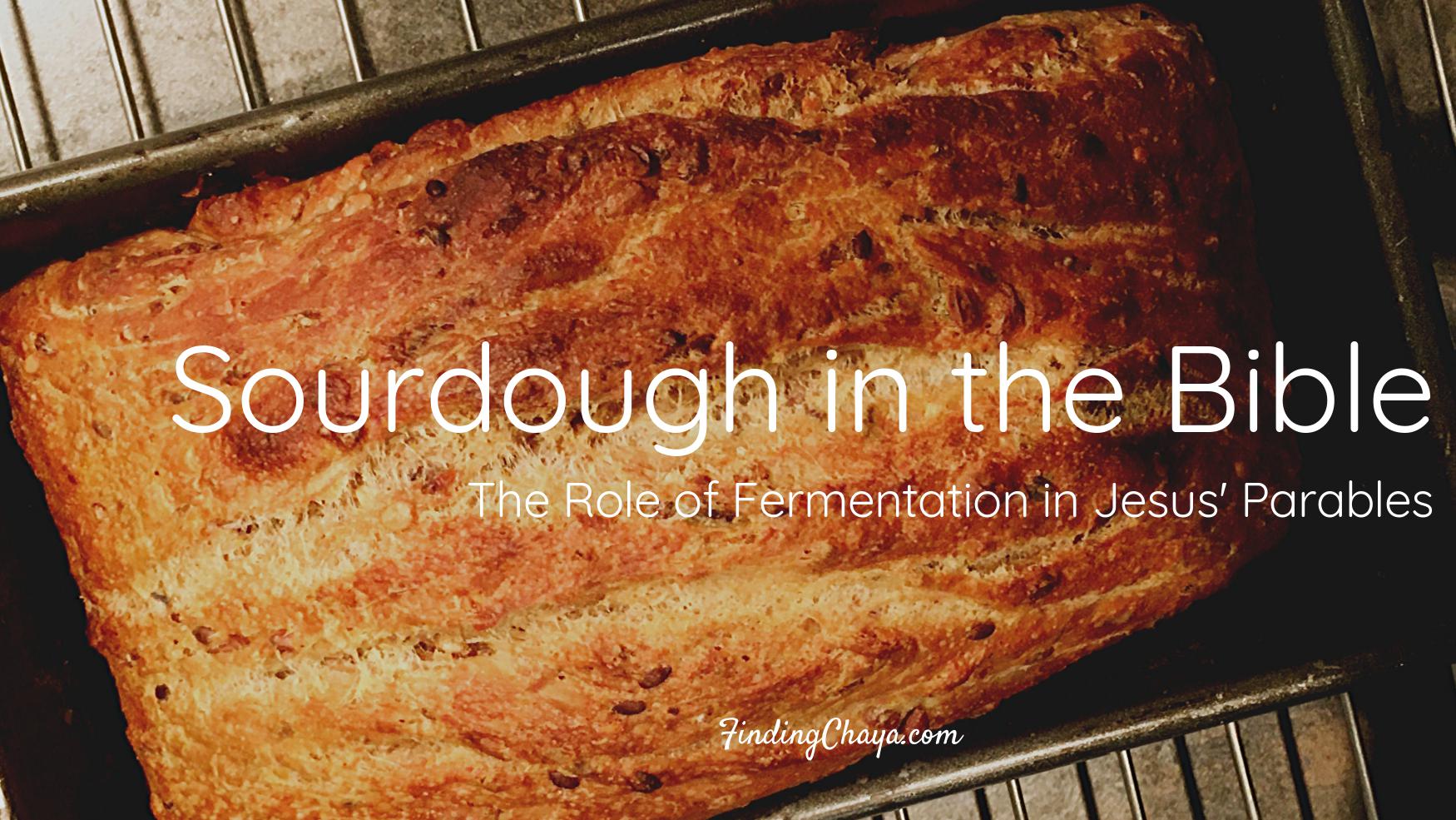 Along with a few other things, it seems like 2020 is becoming “the year that Katy fermented everything“. So far I’ve made sourdough bread, beet kvass, and ginger bug sodas. I have a batch of apple cider vinegar on the go; preserved lemons and maybe yoghurt are all on the list. (Priya Krishna, I blame you for the last one!)

Why the fuss around fermentation?

For those who haven’t binged It’s Alive with Brad Leonie, fermentation is basically controlling what bacteria and/or yeast is introduced into a food’s environment. It is effectively a controlled rot (yuck!) that preserves the food (nature is weird!). It’s a really old way of preserving fresh produce. Think of dishes like sauerkraut.

The other side of fermentation is that it allows us to use nature to cause useful or desirable chemical reactions in our food. Sourdough starters and ginger bugs are two examples of this. They make use of naturally-occurring organisms in the air, i.e. bacteria and yeast, to cause chemical changes in food and drink. By ensuring the right environment is produced for the right bacteria and yeast to grow in carbon dioxide is produced. This enables the dough to rise and sodas to carbonate.

Both are ways of turning basic ingredients (flour, water, salt or water, sugar, ginger, and flavouring of some kind like fruit tea) into something much more useful (bread or probiotic fizz). However, this only happens because the right bacteria and yeast have been introduced to the correct environment. Should the wrong bacteria and yeast be introduced, at best your bread won’t rise and your soda won’t fizz. At worst, you will discover that the sourdough starter or ginger bug has grown mould, becoming potentially poisonous/upsetting to your stomach.

So why am I am talking about fermenting in relation to the Bible? Well, I’ve been thinking a lot about those verses that reference yeast or leaven as I’ve been baking a LOT of sourdough bread.

Biblical authors would have been familiar with sourdough starters, as the kind of yeast we see today was not typically used until the 19th Century. The difference is they call it “leaven”, which is the word used in the Gospels. But it’s all the same stuff. All filled with tiny organisms that, though invisible to the eye, cause massive changes. Namely, nice and large fluffy loaves of bread (assuming you don’t knock the air out in the process).

Think of the Pharisees and Sadducees of Matthew 16 like that. They were a minority of the Jewish community but their influence pervaded all the way through that same community. The same has happened all the way through history. From corrupt medieval popes (looking at you, Alexander VI) through to the overwhelm of “professional Christians” on Instagram now, a minority always seems to have disproportional influence over the Church.

Sometimes this is a positive. After all, if we had more pastors than congregations then the pastors would be running out of jobs. However, this can also be a negative, especially if it means the Gospel is not being taught or is being corrupted. This was the case with the Pharisees and Sadducees. Though only a small group, their influence (or leaven) did not result in the Gospel being taught. In fact, it appears to have been leading people away from a grace and mercy-based relationship with God to one that was bound up in rules.

In the same way that something as physically small as bacteria and yeast can completely change a mixture of flour and water, this numerically small group of men was able to control the way that the Jewish community changed. As they moved away from the Gospel, Jesus warned against their influence with this metaphor of leaven and bread.

The Kingdom of God Starts Small

…He told them another parable. “The kingdom of heaven is like leaven that a woman took and hid in three measures of flour, till it was all leavened.”

Fortunately, the metaphor of leaven is not only used when discussing the influence of religious leaders, like the Pharisees and Sadducees. Jesus also used it to describe the Kingdom of God. In Matthew 13, He uses it to visualise how God’s kingdom might be small but it affects absolutely everything around it.

Just so we are aware of the scale of this parable, three measures of flour is roughly 18.738kg. That’s A LOT of flour! Yet the leaven that the woman adds is able to change all the flour into a state that can be used to make bread. The bacteria and yeast that were in the leaven move through all the new flour, such is their ability to permeate and infiltrate. If you ever try making a sourdough starter or bread, you will see this first hand. It honestly brings home the fact that something small can be very powerful.

In the same way, the Kingdom of God started off small. Just one man and His followers. Those followers, a minimum of 11 men and four women, saw the Gospel message that Jesus taught them spread over the Roman Empire. Peter and John both wrote letters to Christians across Roman provinces; Paul ended up teaching in Rome, though admittedly in chains because of what he taught about the Kingdom of God. Today over 2 billion people are Christians according to Pew Research. This all started with one man and a small group that He chose to teach. Big things can start small.

What Kind of Bread Shall We Make?

The only reason anyone makes a sourdough starter is because they want to make sourdough bread. But it’s not a quick and easy process. Getting your starter going takes time and effort to make. Then, if you want to make more than one loaf, you have to continue to nourish and look after your starter. If you don’t, your starter is going to start growing mould, turn alcoholic or just not help your bread rise. None of these are useful for making edible, yummy bread.

If we switch out our starter, or leaven, for the Gospel message, the bread we’re making is the outcome. Though ultimately it is God in control of where His word goes, these parables offer up two possibilities. One is we take the Gospel, misapply it, and ultimately use it to control. It stops being about God and starts to be about obeying rules. In contrast,  we allow the Gospel to take the lead, to guide and shape our thinking, eventually letting God take the control that is rightfully His. The same starter-message but with two very different response, depending on our actions and response to it.

Essentially, we have a choice here. We can allow ourselves to be shaped by God’s message in the Gospel OR we can force it to take on the shape we want. One approach will see the Kingdom of God leaven first us and then those around us, slowly but surely. The other will most likely result in a legalistic and controlling system. Personally, I know which one I will be choosing. The question is…

What type of bread are you going to make?