Less Regina, More Miranda… But What About Jesus? 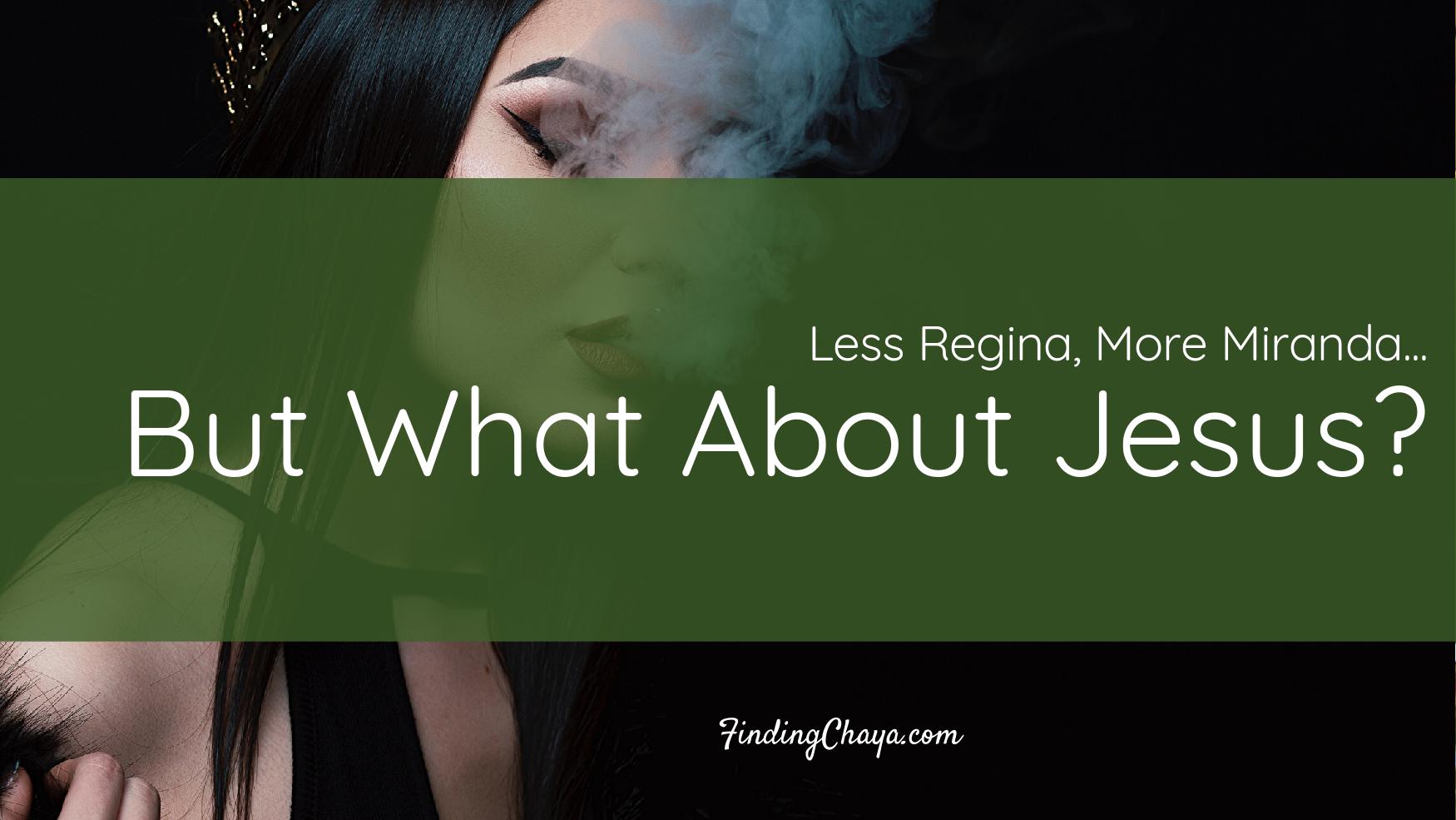 At the start of this year, I decided to set myself a motto:

While I still adore Regina Mills, the <spoiler for OUAT> Evil Queen who became the Good Queen, I have started to realise some of her flaws thanks to binging Seasons 2-4 of Once Upon A Time over the Christmas holidays. I’m in the middle of Season 4 at the moment and Regina’s biggest flaw is all too clear to me now. Everything should be all happy yet Regina is far from her happy ending. In fact, she’s become so obsessed with finding her happy ending that she is going to shape the rest of the season. Come on, you are not surprised that I know the order of what happens in each season of OUAT.

The thing is, as I watched Season 4 for the third time (seriously ABC, that’s the best you could do with Frozen?), I’ve realised I see myself in Regina too much. Not end of Season 7 Regina but self-loathing and happy-ending-obsessed Regina. Now that was an uncomfortable thought to enter 2020 with.

Fortunately, the first day of 2020 presented the answer… or so I thought. Miranda Hart had her Such Fun 10 Year Celebration on TV. It reminded me just how much I loved Miranda. She was fun, way more accepting of her quirks, owned her clumsiness, and eventually stopped apologising for who she is. Oh, and she eventually married Gary but what’s important is that she accepted herself. To be totally, completely, utterly honest, Regina isn’t the only one who could learn a thing or two from Miranda.

Right, it’s about to get personal. 2019 started off pretty fabulous. I had a new job, I was writing regularly and I even had the beginnings of a social life. Then bam, a guy happened. I’m not going to name and shame because he didn’t do anything wrong. What is crucial for our story is what it caused in me. I was distracted, unfocused, and generally a little obsessed. Even my writing began to suffer. I was struggling to write even a monthly post, let alone weekly ones. In short, I was becoming a lust-wrecked nightmare.

You might think this sounds like Miranda’s relationship with Gary but it was actually Regina I saw myself in. Her whole story is based around the search for love. Yes, if you are a Oncer, you know that she finds love with her family. However, for a lot of the early seasons, her storyline revolves around her first love and her true love. All the feelings of hopelessness, loneliness, and dread that she gets wrapped up in are ones I totally get. (Fortunately, not so much the revenge, blood lust, and intense hatred.) I was being sucked into seeing myself as Regina.

So where does Miranda differentiate from Regina? After all, both are obsessed with relationships. Like I said in the last paragraph, Regina allows her search to destroy her emotions. Miranda, on the other hand, doesn’t quite bounce back but she definitely chooses to continue smiling. Instead of being 100% orientated towards men, Miranda does her best to live with as much fun as possible. Finding all three series on iPlayer after the Such Fun 10 Year Celebration broke through everything I had been feeling. I wanted to live a life that had as much fun as possible in it too. And so a motto was born…

But What About Jesus?

With it being the start of a new year (yes I know it’s February but this post brewed for a good month!) the sermon at church was also ‘new start’ focused. Our pastor’s question:

What reputation do we want?

The passage was Colossians 1v15-28. Though it has very little to do with relationship-emotional turmoil I had put myself through, it cut straight to a key question:

This question was particularly driven home by a quote and another question at the end of the sermon:

“Human history is the long, terrible story of man trying to find something that will make him happy beside God” – C.S. Lewis in Mere Christianity

“Do I want to be known as “nice” or as having the hope of the world?“

So what about Jesus? What about this sermon that made me question if I wanted to be like Regina and Miranda or like Jesus? Was I really happy pursuing fun instead of hope?

Well, I seem to be in an honest kind of mood right now. That sermon made me question so much about my new outlook for 2020 because really I knew it wasn’t right. It definitely wasn’t a Biblical outlook, which meant it wasn’t the outlook God wanted for me. Instead, I was being prompted to reconsider everything in exchange for living a life that had hope right through the centre of it. Like one of those sticks of rock from Hunstanton, Great Yarmouth, Blackpool or Weston-super-Mare. Only this stick of rock has HOPE written right the way through, appearing however you cut it.

This isn’t any ordinary hope though. This is about having the hope of the world. Or as Paul puts it in Colossians, “Christ in you, the hope of glory” (Colossians 1v27b). This hope is not the same type that really, really, really wants ice cream for dessert. It is a hope that is firm and sure about how our story will end. In fact, it is so sure that we’ve been told the ending already in Revelation. And if that isn’t enough, we know that Christ’s resurrection means death has been defeated. Our hope is built on a foundation of history.

Choosing the hope of the world is not an easy choice. Continuing to search for a fairytale happy ending or opting for a life of such fun is the easy way out for one reason; they are the choices that society currently gives us. Sure, society gives us other options as well but none of those offers us what hope in God will give us.