Jesus Didn’t Blog || How can We Reach the Unreached if We do not Go Out and Meet Them? 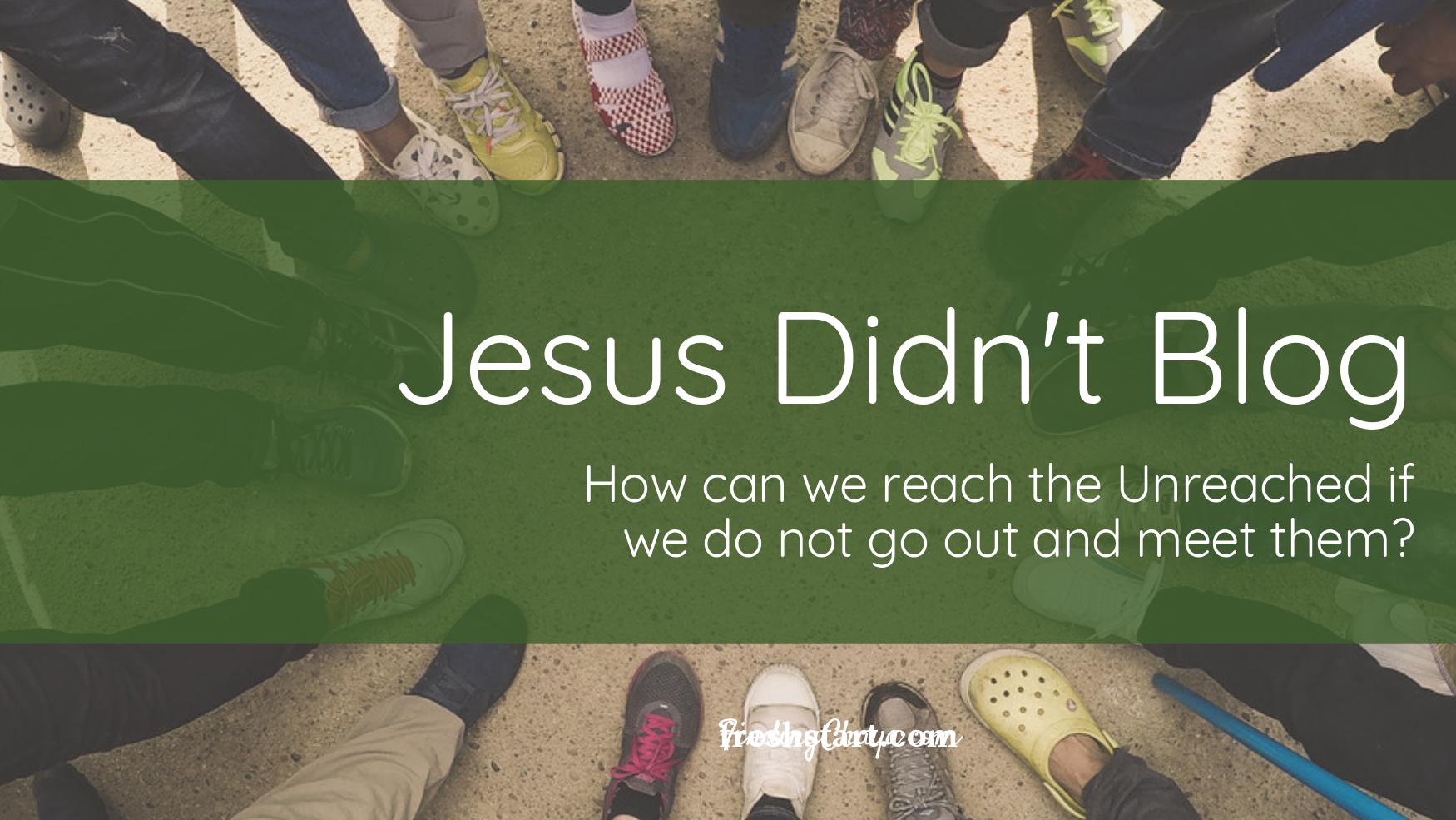 Jesus, undeterred, went right ahead and gave his charge: “God authorized and commanded me to commission you: Go out and train everyone you meet, far and near, in this way of life, marking them by baptism in the threefold name: Father, Son, and Holy Spirit. Then instruct them in the practice of all I have commanded you. I’ll be with you as you do this, day after day after day, right up to the end of the age.”

The Great Commission is Jesus’ final instruction to His disciples. It is the moment that they are told to put everything they have learned over the past three years in to use. And get this… they didn’t have a single laptop, tablet, smartphone, or even “dumb” phone between them to do it with! If they wanted to reach people in order to make disciples, they could not hide behind an anonymous blog or post gorgeous photographs of their Torah and coffee on Instagram. They had to be face-to-face with people, actually talking to them!

I do realise the irony of writing this on a blog. It may not be anonymous but I know I sit behind a computer screen. I avoid the difficult confrontation that can happen offline when you are facing the person who disagrees with you. It feels easy. Just a few taps on a keyboard. Nothing to it.

As I’ve been watching Marvel’s Agents of S.H.I.E.L.D. recently, this quote from Fitz seems appropriate:

“I was doing just fine tucked away in a safe, indoor, non-mobile lab at the academy! Then you had to go and drag us into this flying circus! Didn’t even pass our field assessments, for God’s sake!”

Sometimes that is how The Great Commission feels. Like we are being sucked into a flying circus that will just result in everything going wrong. Just like Fitz never wanted to be part of a field team, those of us who aren’t “gifted” with whatever it is that makes The Great Commission “easy” do the best we can to stay in our equivalent of a “safe, indoor, non-mobile lab”. For a lot of us, there is nowhere safer than being behind a screen. We reduce ourselves to a username and photograph instead of flesh-and-blood with feelings.

The Timon and Pumba Effect

Along with The Great Commission, there are also passages like this one from Romans 10:

This passage can feel like a literal guilt trip for those of us who aren’t the natural evangelist or who have bad experiences of discussing our faith with other people. The other day I went to see the new Lion King with a friend. One scene really summed up this guilt trip. Simba, Timon and Pumba discussing what stars are when Simba shares his belief that the stars are past kings watching over him. His friends’ response? To laugh at him!

How many of us have felt like Simba? We have laughed at our own beliefs in order to fit in only to feel guilty because we didn’t stick up for own beliefs. When we read Romans 10, it is easy to end up feeling guilty for every time we haven’t stood up to our Timon and Pumba, instead of feeling empowered to spread the Gospel. Rather than encouraging us to suggest a Bible study to the colleague always asking questions, we sink lower into our sofas and figure that if we stick a cute verse on Instagram then we’re covered.

The Unreached in Britain are Increasing

Here is the kicker. There are less and less people in this country who have a Christian in their life. I’ve had at least two friends who have said I was their first Christian friend. I didn’t meet them until I was 18 and 24! On a national level, while I have to admit I can’t find a source to prove this, it definitely feels like nominal Christians (those who identify as Christian but don’t believe) are on the decline. The pressure to attend a carol service at Christmas or Easter Sunday Holy Communion is reducing and, while all clouds have a silver lining, this means that fewer and fewer people will hear the Gospel. So while The Unreached within a missional setting typically refers to people groups with no indigenous church, it also seems that there are a growing number within Britain who are just as unreached.

If anything, those living in Britain who have never had anyone reach out to them with the Gospel are in an even more disadvantaged position. They have grown up in a society where the media does one of a couple of things:

All this means that a lot of people living in Britain don’t have a positive view of Christians or the church. That’s not even including all the debates around same-sex attraction, the role of women, and a ton of other issues, which have been twisted into arguments on a national stage. So when we do have the guts to stick our hand straight up and go “Hey, I’m a Christian and I believe that…”, we are almost always going to be the minority in the room.

Go Out and Meet Them

Should being the minority stop us from sticking our hand out and declaring our faith? No, it shouldn’t. Yes, it does but it should not.

We need to go out and talk with them face to face. I called this post Jesus Didn’t Blog. Why? Because He didn’t. Jesus did not have that option. He had to talk to people, individually and in huge crowds. Whether it was just His closest friends or groups of over 5,000 people, Jesus spend time with them in person. No electronics in sight… or even invented. The image that we get from the Gospels is of a man who valued each person He came into contact with. He wanted a personal relationship with them. It didn’t matter if they were a tax collector or fishermen, child or elderly woman, Jesus wanted to look you in the face and know who you were.

I know this seems like a lot. As an introvert, albeit one who likes people in small doses, the idea of living like Jesus sounds exhausting. I need my time on my own to the extent that it has made me hesitant about inviting people into my house. But the reality is that you will be meeting with people who don’t know Christ. It’s almost impossible not to. What we have to decide is whether we will be brave enough to bring Jesus along with us when we meet them.

There is a Place for Technology

In the midst of all this, it could be really easy to see this as a call to abandon all forms of evangelism and witnessing that isn’t face-to-face. I promise you that is not my intention. I love technology, particularly social media and blogging. I’ve been writing online since I was 15 and my faith has always featured. I’m not about to stop that part of my life.

Instead, this is a plea for us to consider what role social media, blogging, vlogging, podcasting, and all the other opportunities that technology gives us should have in our lives. In particular, we need to think about what role they should have in spreading the Gospel.

What would you do if your friend asked a question about the cute Bible verse image you shared on Facebook? Or the Christian book you’ve been reading and shared on Instagram? The question we really need to be asking is whether will we back up what we post online with what we say offline. If we aren’t willing to back up what we post with what we say, then we shouldn’t be posting it at all.

*I just want to say that the individuals involved in the various scandals deserved to be arrested and tried for their crimes. However, I will argue against the smearing of a whole denomination because of the actions of a few, no matter how senior.