Harry Potter and the Millennials – Why do we love the Wizarding World so much? 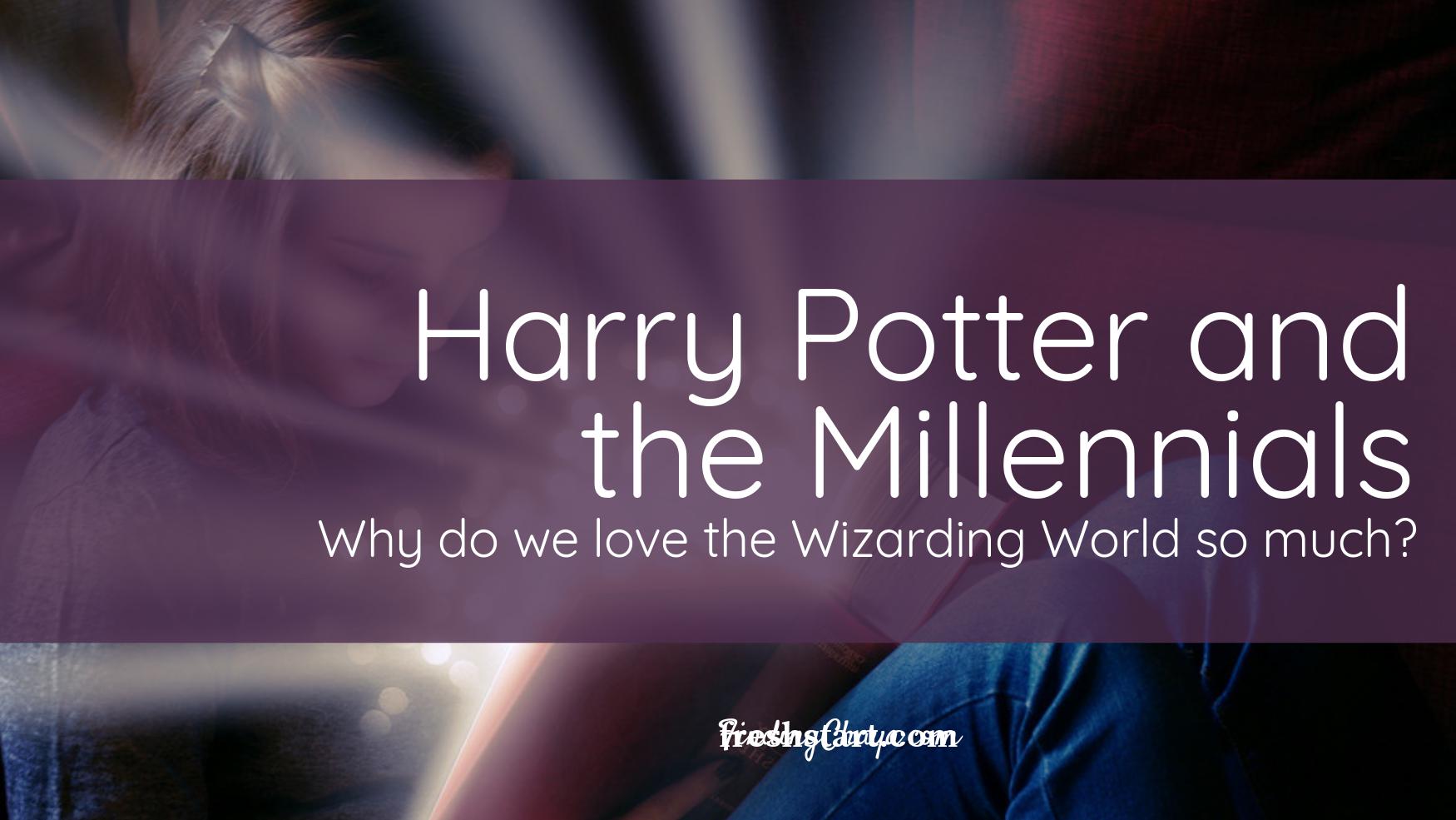 “Of course it is happening inside your head, Harry, but why on earth should that mean it is not real?”

The Harry Potter series is the book series that sums up an entire generation. Even if you haven’t seen the films, let alone read the books (go, read them now!), you probably know the names of the Golden Trio. You might even know who Dumbledore and Hagrid are. If you’re a Potterhead, you may even know who the Silver Trio are.

(If you don’t know, the Golden Trio are Harry Potter, Ron Weasley, and Hermione Granger. The Silver Trio are Ginny Weasley, Neville Longbottom, and Lune Lovegood.)

Harry Potter was one of the first fandoms. While Lord of the Rings and Chronicles of Narnia were the first fantasy series to become household names, it was Harry Potter’s creator, J.K. Rowling, who had the Beatlemania-style fame and book signings. While I was never there at midnight, I picked up my pre-ordered copy as soon as I could… until I got bored of the hype and lost interest by book 7.

But my loss of interest didn’t stop the Wizarding World from becoming a huge fandom that has enthralled hundreds of millennials (yep, I’m using that label) from wishing they had got their Hogwarts letter. Just check out the careers of YouTubers like the Super Carlin Brothers and Seamus Gorman. Harry Potter and The Wizarding World has become a huge part of their content.

Even I have fallen back in love with J.K. Rowling’s creation after rereading all the books during my MA. I’m now a proud Hufflepuff (link to past newsletter) complete with Newt Scamander scarf, constantly having to tell myself that I do not need to buy a Bowtruckle, and will happily explain why being in Slytherin isn’t a bad thing or how Snape is an awful person but great character. You could say I’m 100% a Potterhead.

*Casually nailing my colours to the mast*

What’s so great about the Harry Potter Series? Well, let me explain…

There are a lot of books out there about children who have a specific destiny or appear to be “chosen”. Sometimes they are a group, like the Pevensies in the Chronicles of Narnia, and sometimes they are solo, like Percy Jackson in the Percy Jackson and the Olympians series. But for some reason, they haven’t struck the same chord as Harry Potter did. The orphan with a lightning bolt scar, who lived in the Cupboard Under the Stairs and found out he was a wizard, captured the heart of a generation. While adults did read the books, it is those of us who grew up with Harry, Ron, and Hermione who have kept their story alive.

Severus Snape’s most famous quote, referring to his love for Lilly Potter, could probably describe the adoration of Potterheads for the original books. While it may look like seven books telling the somewhat dangerous story of an orphaned boy, to the reader it becomes so much more. Yes, Harry is the hero; we see him go from being a potential case for social services to doing the impossible in order to save his friends. But we also see each of those friends grow, teaching us lessons as they went.

Essentially, J.K. Rowling taught us that no matter where we start from, we all have our own talents and gifts that make us all special. But it is more than that. Luna and Neville’s inclusion in the Silver Trio showed that no one had to be left out. Sirius and Lupin’s love for Harry demonstrated what family meant even when blood wasn’t involved. Harry and Hermione are examples of how girls and guys can be “just friends” even when the world says otherwise. Ron warned us about jealousy but also proved that you can defeat it. And for all the single girls out there, we can learn a lot about patience from Ginny (probably not what J.K. intended but oh well).

Harry Potter, his friends, and his family taught a whole generation what it meant to accept each other.

What about his parents?

James and Lilly Potter. One started as the popular boy and the worst kind of bully but finished as someone willing to stand up to wrong. The other stood up against the bullies all the way through her life, even when it made her unpopular. However, the most important lesson we learnt from them was about love. Specifically, it is the unconditional love that causes Lilly to sacrifice her life for baby Harry.

While Voldermort never gives James a chance to run, he repeatedly gives Lilly the choice to stand aside as he kills Harry. Every time Lilly denies him, continuing to protect her son. She does this knowing it will result in her death. Her love for Harry is so strong that it stops the killing curse from working on him. Instead, it leaves only a scar on his forehead. What should have been a sure and certain death turned into a second chance for The Boy Who Lived.

So why are Millennials so obsessed?

Millennials aren’t just obsessed with the Wizarding World. The Marvel Cinematic Universe, Once Upon A Time, Doctor Who, and so many other fandoms have hundreds of followers dedicating time, money and creativity to them. Whatever your interests and likes, there is almost certainly a fandom out there for you.

In the run-up to this article, I had a chat with two of my favourite Potterheads on Twitter (Rhi and Heather) about what the books mean to them. While we were chatting, Rhi came out with this quote:

“I don’t think it was ever really over for me, because I often thought about it in the back of my mind and now after becoming a Christian the series means even more to me than it ever did then. The series is endlessly profound reading filled with deep truths.”

Rhi summed up something very true about the series: for those of us who love the books, we see a lot of deep truths in them. So what are these deep truths?

1) What sets us apart should not stop us

We all love a hero. Even more than that, we all love to see someone develop and become more than we expected. That’s why Once Upon A Time fans love Regina Mills so much (#EvilRegals, you know what I mean). In the Wizarding World, it’s why we love Ron Weasley who goes from being the poster boy for downtrodden and envious through to destroying a Horcrux (here).

Characters like Regina and Ron give us hope that we can all be better versions than who we are now. As a child, I crushed on loved Ron but couldn’t stand Hermione’s seeming perfection. With Ron, it was exactly what set apart him apart that eventually saved the day. Just imagine a story where Harry Potter was best friends with Draco Malfoy. How long would it have been before Harry was puffed out on his own fame and being fed lies about “mudbloods”? The very things that made Ron stand out, i.e. his family being poorer and larger than most, were what kept Harry grounded.

Ron helps us to believe that, even when we feel different for all the wrong reasons, we can all become more than we expect.

2) We are all looking for a saviour

The whole of the wizarding world is looking for a saviour. Harry, as The Boy Who Lived, has this near-legendary role because his survival apparently destroyed a threat to the world. He became their saviour, whether he wanted it or not. Then, when Voldermort returns, Dumbledore puts all his hope on Harry to be the saviour they all need again. Even Hermione and Ron, the two people who should know Harry is no saviour, are guilty of putting all their hope in him. Considering that they are there helping him save the world, they still turn to him when they need someone to put their hope in.

In the real world, our everyday lives, we’re all looking for a saviour. Some of us want to be that saviour; the rest of us want to find that saviour. Harry’s story gives us a saviour to believe in; an example of what a saviour could look like. Just someone who thought they were ordinary until one day they realised something had to change. In a world today that is as insecure as it has ever been, we are looking for those saviours even more. When we don’t find them in real life, it is all too easy to hide in books and films like the Harry Potter series with Harry as our saviour.

J.K. Rowling filled her books with all kinds of relationships and all kinds of love. Despite all of that, it is Lilly’s sacrifice that is the most important love in all seven books. She refuses to run even when given the option to live, knowing she will die. This is the key to understanding the whole story. It is why Harry survives the first time. The knowledge of this love is what keeps Harry going even when all of his circumstances say he shouldn’t.

This is what is at the heart of the Harry Potter series: unconditional love. It gives Harry a second chance and provides that essential example of what loving each other should look like. More importantly, unconditional love is what lets Harry and his friends win in the end. The example shown by his mother, and others after her, pushes and inspires Harry to his own act of love as he sacrifices himself to defeat Voldermort.

This is what has given J.K. Rowling’s series its enduring appeal. Sure, the characters are fantastic and the plot is one of the most intriguing ever written. But the constant thread of unconditional love, which started with a mother’s sacrifice, keeps us all coming back to it. It’s a small reminder in a world that can seem particularly loveless that extreme acts of love are possible.

The Harry Potter books captivated a generation. It wasn’t just the plot and the characters. J.K. Rowling hid so many messages in her books that we have now adopted as truth. In a society and culture that often feels like it’s tearing itself apart, it is no wonder that we love these books.

However, there is a better option. I’m going to discuss that more in my next post. For now, I hope you understand a little more about how books and films can exert such powerful pulls over our lives. Harry Potter is just one example of this.