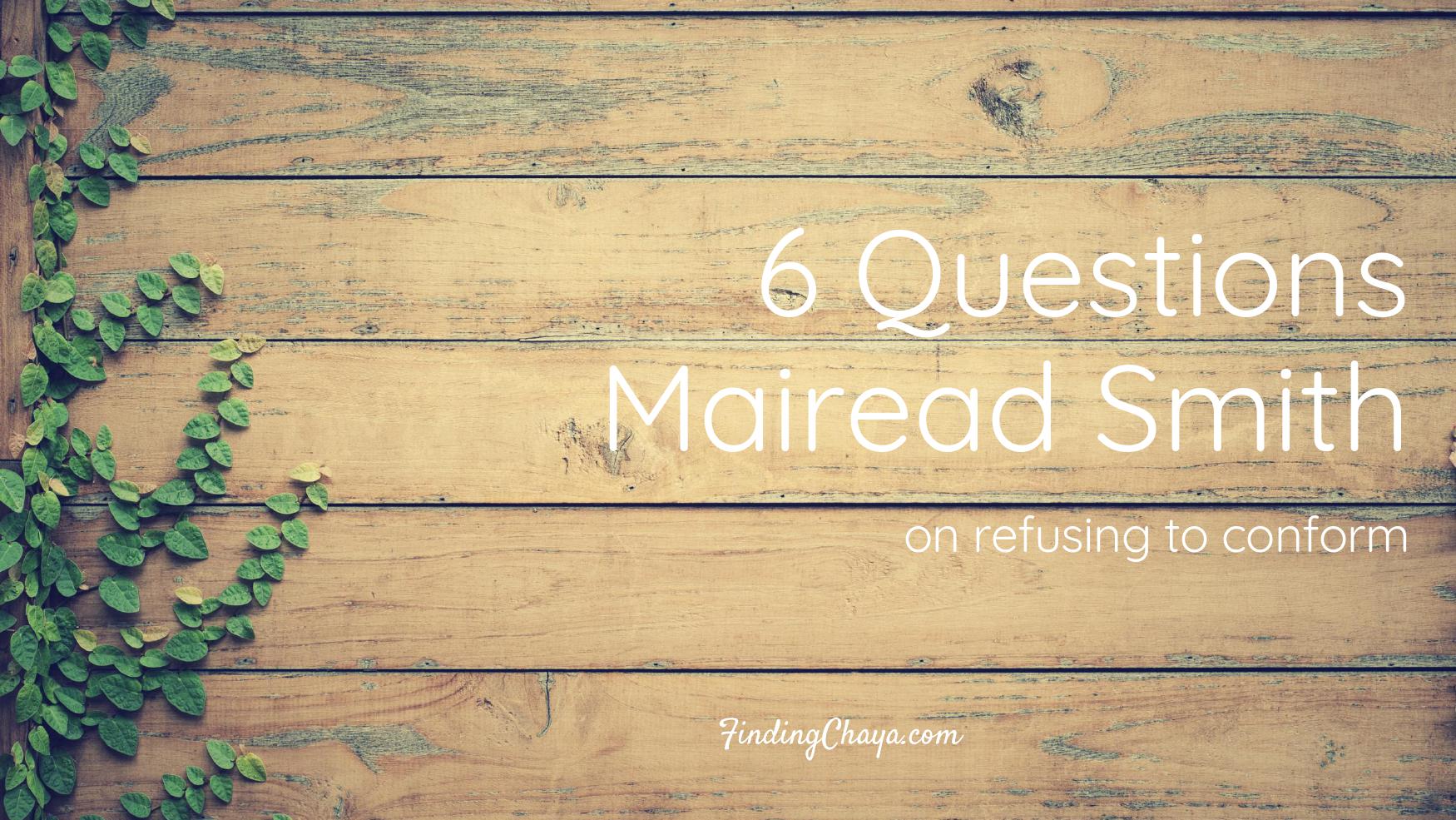 This week I’m putting Mairead Smith in the hot seat. Though I first met Mairead as my mum’s work colleague, she eventually became my boss and taught me everything I know (a lot of which I’ve forgotten) about Information Management – it might sound boring but it’s an admin lifesaver! However, she’s definitely not your average manager and always finds a way to do things her way. Keep reading if you’ve ever wondered what it looks like to live an ordinary life in an extraordinary way.

I’m originally from Hertfordshire, brought up in a “half-Christian” home; as my mum was the one that took us to church! I was a hot-tempered child/teen although despite that I wasn’t a rebellious teen or did anything “bad” as it were. I went to uni, came back home and eventually got a job in the Civil Service. That was meant to be temporary until I got the job I wanted or saved up to study again, but weirdly I stuck with it and have been blessed by the experiences within my career! I’ve been in for over 20 years now which is scary to think about!

2) One of the things about you that has always stood out is how unashamedly yourself you seem to be, whether that is in your love of Doc Martens or sticking up for your beliefs. Where did you gain this self-belief?

My parents taught us to be honest about ourselves and our beliefs; otherwise you’re just lying about yourself and who you are.
And yes, I love my DMs! I have 8 pairs… and I still wear them!

3) You graduated with a degree in History of Art & Architecture and have ended up as an Information Management professional. Did you ever imagine you would end up on this career path?

Not really although there was an inkling of where I was headed with the module on the Country House in which we visited a County archive and I found this fascinating. Following uni, I needed a job and after a short stint in an office my Mum convinced me to apply for a role in the Civil Service as she said it could open doors. She was right as I knew I wanted to do a Masters, but couldn’t afford it at the time. I had always been in roles that involved records and files and it came as a natural progression. I was fortunate to land a managerial role in Project doing a lot of what is known as information management’ and this led me to apply for and undertake my Information & Library Management MA. This, in turn, landed me my first post as an Information Manager and it’s progressed from there. I know God has blessed me throughout this time, especially as I have been able to remain in the Civil Service despite my husband being in the Army while many spouses have to leave their jobs each time they are posted.

Along with your career, you’re married to a vicar. “Vicar’s wife” comes with its own job description so how do you keep a balance to your life?

So my husband (as he says) has never been, nor ever will be, a vicar. I had a short spell as a curate’s wife until he joined the Army as a Chaplain.
As a vicar’s wife, there is a lot more expectation for the spouse to undertake and assist the vicar; although I was fortunate as I had a good teacher in Sarah (the wife of the Vicar who was my husband’s training incumbent) who had a career and only took on certain roles in support of her husband. This made me see it shouldn’t be a “buy one get one free” in the church ministry as many spouses often have their own career or calling outside the church and should not be expected to take so much on just because they are married to the vicar.
So although it may seem my spouse’s role is as a vicar, it isn’t and is very different! I don’t host tea parties, run coffee mornings or parents & tots mornings, or help out at a church fete… my role is very much just supporting my spouse spiritually, mentally and emotionally as well as supporting fellow spouses of Chaplains (social media is a great invention for this!). I don’t get involved in any of my husband’s work with families etc. The only stint I have had was when I spotted we had a growing number of kids in the church so I built up a stash of biblically themed colouring sheets. This soon moved onto a type of Sunday Club as a fellow Chaplain’s spouse was great with kids, especially telling stories and I did the craft bits. I have said I wouldn’t be rushing to do it again though! It’s not my ministry.

5) Finding Chaya is for those women who are still figuring out how they fit into the world and the Church. What advice would you give to them?

Don’t let people in church say what you should be doing as a woman or feel you must conform to a female stereotype at any age. I found this can happen; the expectation is all too often you MUST be married by X age and MUST have kids or have a certain type of career. Some women are not called to that life and don’t “fit” the expectation. But that is ok!

When I met my spouse some friends at church were surprised I would be moving away. So I don’t fit the expectation from some; I moved away from my family (and still move every few years), I don’t have children (due to medical issues) and for too long I have been assumed to be a “career woman” by some, which isn’t true. I work because I can and I understand I have a gift in this area, often helping change chaos to order!
Yes, at 18 I thought I’d be married by 25 (wrong, it was later) and have kids (wrong again); but I have been blessed in my life. Both my husband and I have had God-given opportunities so far and both know we are blessed by God in our life.

6. As a final question, I know you are also mum to two troublesome cats. Do you mind sharing a story about them?

Which one? There are so many to choose from….despite being “seniors” (at 12) they are both still very badly behaved. They are known for stealing food, whether it’s their treats (they broke into the container with them in) or breaking into their food cupboard (it has a bolt now). They’ve also gone for boiled potatoes, loaves of bread, cooked courgette, cooling brownies, cooling flapjacks, defrosting steak (they hid in the room where they were), mince pies, Christmas pudding, corn on the cob, stealing from the kitchen compost bin and also general kitchen bin diving…although the best one is spaghetti bolognese.
They were both still young and after dinner we went out leaving the pan on the hob cooling so we could freeze the leftovers. On our return the pan lid was on the floor and the pan askew on the hob, but empty. One cat looked innocent cleaning paws but we knew they’d been at it as there were bolognese paw prints on the hob. The other gave the game away as her white paws were orange! We can’t leave any food out no matter how long for!